There are many headlines for yesterday’s elections: the victory of the Labour type Socialist Party; the entry into Spanish Congress of the far right VOX; the continuing importance of the Catalan struggle…

It will be some time before a government is formed, and many issues will need further analysis. Socialist Worker explained the background to the elections when they were announced, and we won’t repeat that here. This article is a rundown on the headlines.

A victory for Pedro Sánchez

The PSOE, the party of the current Prime Minister, Pedro Sánchez, won an impressive victory, rising from 85 seats with 5.4 million votes in 2016 to 123 seats with 7.5 million votes.

Sánchez is much more moderate than Jeremy Corbyn but there are some parallels. Only two years ago, the right wing old guard of the PSOE ejected Pedro Sánchez from the leadership after he used the Socialist votes in Congress to try to stop the right wing PP from taking power. Sánchez fought back and won the leadership again. So this election result, based on opposition to the right, is a slap in the face for that old guard.

That said, under Sánchez many PSOE policies still cede to the arguments of the right, and even the far right. To give only a few examples, he has kept the Catalan political prisoners —who have still not been condemned of any crime— in jail; after a brief photo opportunity welcoming refugees, he has stopped the rescue ships from operating; he maintains the main elements of neoliberal economic polices.

Pedro Sánchez is the only leader in a position to form a government; the big question is whether he looks left or right for the partners he needs to obtain a parliamentary majority.

Podemos and its different coalitions fell from 71 seats to 42. This defeat is a result of several factors.

When it was launched in 2014, Podemos was presented as the great new hope for the left. But now it is effectively just another reformist party. From being an “opposition to the regime of 1978” (the date of the current Spanish Constitution) they have become the great defenders of that Constitution. In one of his key electoral speeches Pablo Iglesias insisted on his pride in Spain, celebrating everything from cleaning workers’ struggles to the armed forces.

Also, Podemos has suffered massive internal tensions and splits. These are mainly a result of the top down leadership methods that go with “politics as marketing”; democratic grass roots organisation becomes an obstacle to the obsession with tweeting the right messages and getting sound bites on TV.

Their main aim in these elections was to obtain enough seats to form a government with the PSOE. Many people followed the logic that if what was needed was a PSOE government, they should vote PSOE.

If Sánchez accepts Podemos’s offer to form a coalition, it will mean a government more to the left than otherwise, but it would be political suicide for Podemos. However, Podemos was formed to enter the institutions, not for the struggle from below.

In any case, it is more than clear that we need an anticapitalist alternative to Podemos, and that remains to be built.

The right: wounded and dangerous

Many people feared a repeat of the right wing alliance — the PP, Ciudadanos and the new far right party, VOX — that took power in Andalucía last December, replacing the PSOE in the regional government. The fact that the right didn’t win yesterday is very positive and important.

The main conservative party, the PP, fell disastrously, from 7.9 million votes and 137 MPs to 4.4 million and 66 seats. This is a serious defeat for the party’s new leader, Pablo Casado, and his strategy of trying to deal with the rise of the far right by copying it. We will have to see if the bulk of the PP leadership responds to the defeat by changing direction, or by going even further to the right.

A lot of the PP’s loss went to the centre right Ciudadanos party (Cs), that rose from 3.1 million votes and 32 seats, to 4.1 million votes and 57 MPs. While Cs did pact with the PP and VOX in Andalucía, unlike the PP it has tried to maintain some appearances of “liberalism”.

But the big story on the right is the rise of VOX, which enters Congress with 24 MPs and 2.7 million votes.

VOX has grown from almost nothing to over 10% in less than a year. It originated as a right wing split from the PP in 2013. The PP’s ongoing crisis —its corruption, its inability to resolve the Catalan issue, and other factors— has led to a haemorrhage of its right wing members and supporters to VOX. But VOX has also sucked in out and out fascists, such as former members of Plataforma per Catalunya, the Le Pen type party that dissolved itself in February, following years of defeats and splits caused essentially by the campaigns against it of Unitat Contra el Feixisme i el Racisme (UCFR), the Catalan sister movement of Stand Up To Racism.

So rather like UKIP in Britain and AfD in Germany, VOX includes both populist right wing elements and fascists; it is too soon to tell which factor will prevail.

One very important point about VOX is that it is not mainly winning support in poor working class areas, but rather from former PP strongholds. To give an example, the two towns with the highest income per person in the whole of the Spanish state —both in the outskirts of Madrid— had a massive vote for the far right. In the richest, Pozuelo de Alarcón, VOX obtained 19.8%; in the second richest, Majadahonda, 18.8%.

But it’s not only economics. The third richest town is Sant Cugat del Vallès, in Catalonia, close to Barcelona. Here VOX “only” got 4.1%; above average for the Barcelona region, but nothing compared to the rich suburbs of Madrid.

Even though the worst predictions of 30, 40 or more seats were not fulfilled, 24 far right MPs is very bad news. It makes it all the more important to continue to build movements like UCFR across the whole of the Spanish state.

The Catalan question will not disappear

The big news here is that the centre left pro independence party, Esquerra Republicana de Catalunya (Republican Left of Catalunya, ERC) won the elections in Catalunya, with 24.6% of the votes, ahead of the Socialist Party with 23.2%. ERC even beat the Socialists in the city of Barcelona.

In the face of the stalemate in the independence struggle, ERC has opted for a strategy of broadening the movement, linking the national question with social issues. In these elections they stood in coalition with Sobiranistes, a split from the space around Podemos of people favourable to the right to decide — as against the official Podemos position of ambiguity, when not hostility, over independence. The Catalan Communist Party is a key element of Sobiranistes and its leader, Joan Josep Nuet —due to go on trial for his role in the referendum— is one of ERC’s new MPs.

ERC has its contradictions and limitations, but its success in these elections is a good sign.

All of this —and there were significant votes for two other explicitly pro independence parties— shows that the Catalan issue will not go away, as the majority of Spanish parties would like. There is no alternative to respecting Catalan people’s democratic right to decide on their future.

The alternative is increasing repression and the abandonment of democracy.

These elections were exceptional in Catalonia, not only in the results, but also because several of the leading candidates —for ERC, Oriol Junqueras for Congress and Raül Romeva for the Senate; for the centre right Junts Per Catalunya, Jordi Sánchez— are political prisoners and currently on trial in Madrid’s supreme court. They have all been elected and it remains to be seen how the Spanish authorities will react.

Some of the challenges have already been mentioned. There is an urgent need to build united movements against racism and the far right. This means overcoming the typical dominant ideas of how to face up to fascism, which have been shown to be ineffective.

The Catalan issue is a key issue for the left and progressive forces across the Spanish state, but most the left is incapable of taking a principled position over it.

Finally the crisis of Podemos confirms the urgent need to build a coherent anticapitalist left. That in fact is a key factor in being able to deal with the previous issues mentioned.

Without a left committed to fighting for its principles at the same time as working with other people in concrete struggles, we will never see the broad movements we need to deal with the many serious challenges before us. 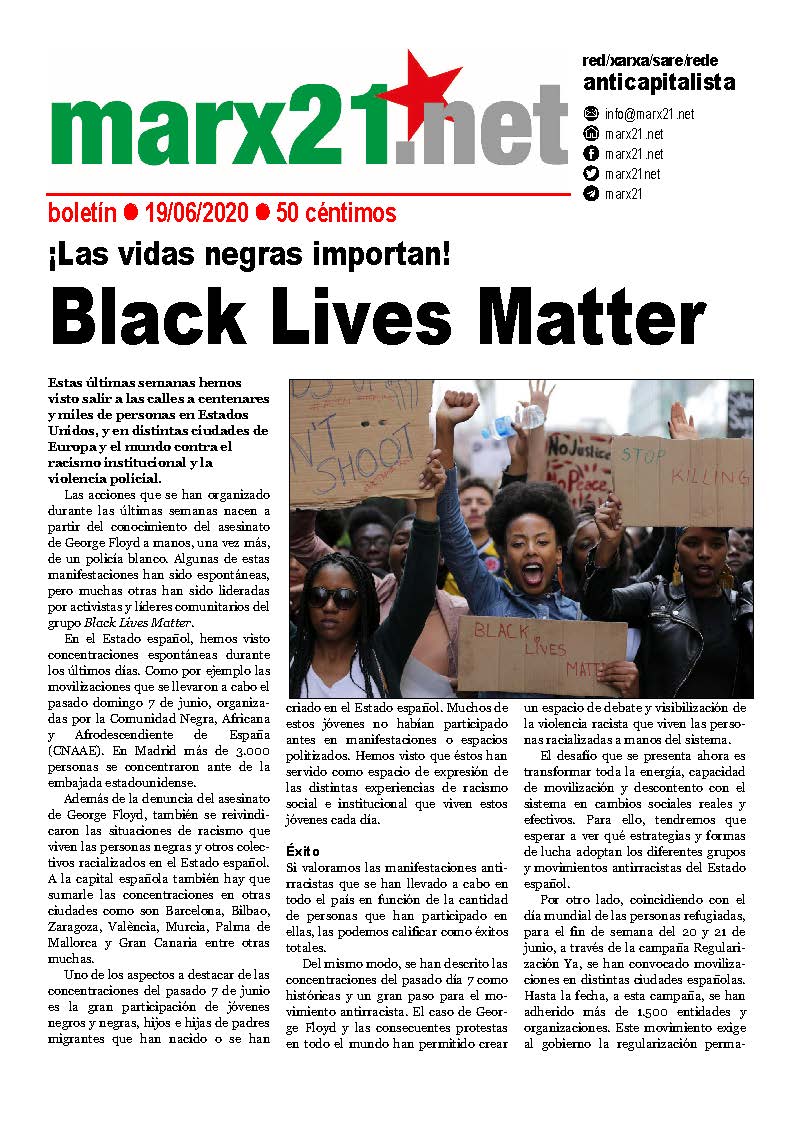 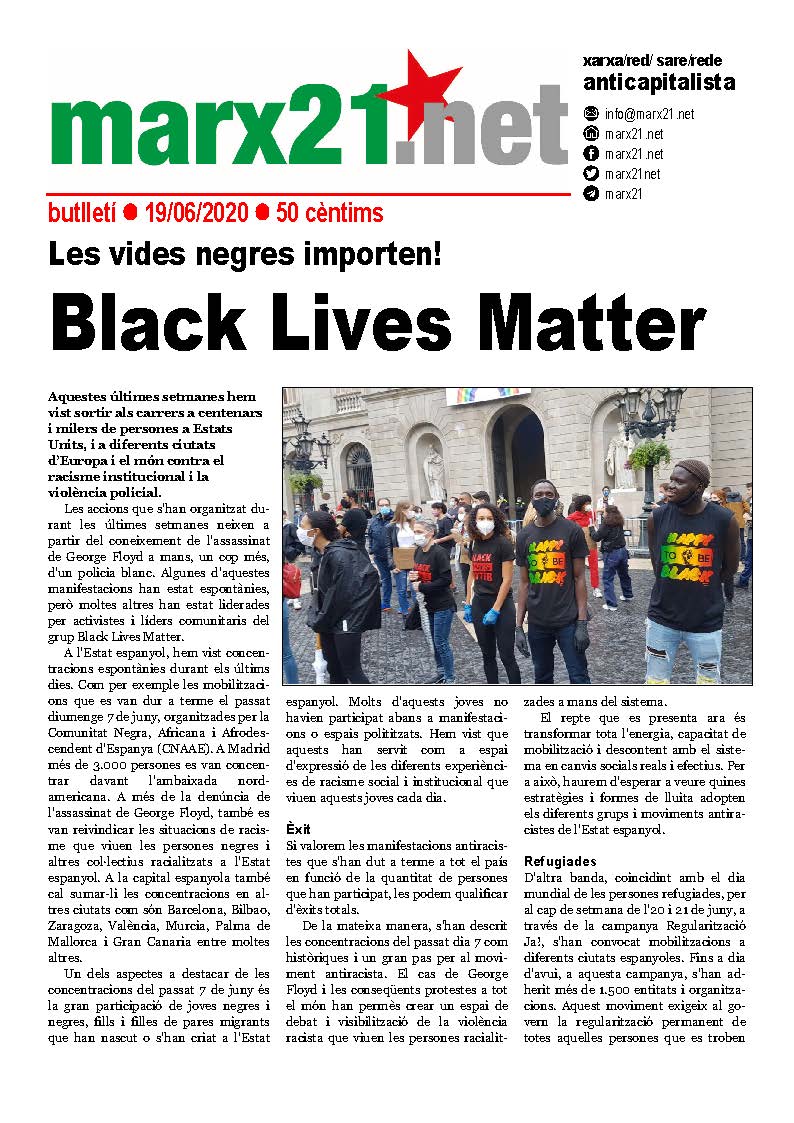